Never not learning: Calculated risk and a healthy career

Risk.  Continuous, planned risk is the most important thing anyone can do in their career.

In Webster’s dictionary, risk means “to expose to a hazard or danger.”  I agree with this definition, but lets look at this as a paradox.  If you don’t expose yourself to the potential hazard it means you are staying safe in your world.  Safe has several definitions, which equate well to risk but it also means, in baseball, “reaching a base without being put out.”  This is probably a very good image for us to work with.

If you don’t try to steal the base (i.e., take the risk to move ahead in order to win the game) you will certainly stay safe, but you also have the implication of safe being passive or lacking effort.

In short, no risk no gain.  Increase the risk, increase the likelihood of loss. Decrease the risk, increase the likelihood of being stuck, limited, or just plain losing the game to the more assertive, risk-oriented players.  Now, using the same metaphor, we know that if you risk stealing the base too many times or without planning you can often lose the game, or even lose the World Series, or the business world equivalent, which might be a big deal and harmful to your career.  Conversely, all great players and performers take risks to get to the top.

When I suggest risk is critical to successful career growth I do not mean to do it without due diligence.  You should determine goals that fit your best talents, interests, and work environment preferences and make a carefully constructed plan to move towards those goals.  That might include loads of forethought, planning, and research.

It will also likely include some communications with peers, outside helpers or coaches, probably spouses, and often your boss.  It may well include learning a new skill or expanding on an existing skill.  In short, the risk will eventually come down to communicating your (well planned) goals to others in the world who can impact your ability to get to those goals i.e., cannot get your boss to give you a new job that you want unless he or she knows that is what you want.  Again, my notion of risk is definitely planned, thoughtful, well communicated, and well-implemented. 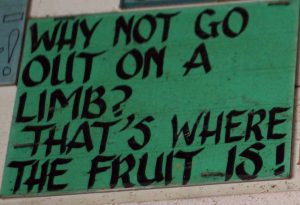 What keeps us from taking risk in our career?  Well, the major thing is the potential of loss, which tends to increase with both age and, oddly enough, with accomplishments.  If you are twenty-five, a recent college grad and don’t have anything to lose such as a family, a house, a career future then you will take risks.  Your skills increase, you move up in productivity, income, and status.  Once you reach age 38 to 50 you have much more to lose.  Family, income, home, status, reputation, and career/job stability are all at risk when you try to change your career even in little ways.

What happens is that you reduce your risking and therefore your productivity and career development.  It is unconscious and can be damaging without you even knowing it.  That is the very time I’d incorporate career planning and risking.  It is conversely the very time you quit risking as much.  This concept was researched by Gene Dalton and Paul Thompson in their 1986 book Novations.  And from my own clinical experience of thirty eight years I am totally aware that career risking goes down as you age and have more to lose.   As the research mentioned here indicates, that results in less productivity and fewer promotions and income advances.   No risk no gain once again.

How do I know what I want to do in my next career step?  The simple answer is: trust your intuition. Move towards what you intuitively like to do and do most naturally.  Part of reducing risk is thinking that you should stick with only what you know already and not try anything in your career where you don’t already know how to perform well.  But, if you did that in a field like IT, you’d become obsolete very quickly.  The trick is to always be planning and developing the elements of your desired new skills and career goals.