The Best Intentions vs. The Right Career

For many years clients have told me about not really choosing their careers. “I just fell into it,”, “My college counselor selected a path for me,” “My parents insisted/encouraged me to be ABC,” or “My boyfriend or girlfriend or roommate was majoring in XYZ so I did too.”  In short, they did not decide on the right career for themselves based on any criteria they developed.  It was developed for them. 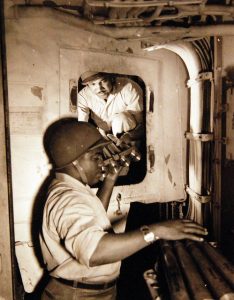 Public domain photo by National Museum of the U.S. Navy.

In the U.S., it was long accepted that you could grow up to be something your parents or advisors chose, or pick the most popular career for your era.  I call this the Blue Collar Career Choice model. The world gives you job options, so make yourself look like one of those jobs.  Because no one tells young people how to define their own path or how to create criteria for career selection, they tend to defer to others.  If you add in that we really don’t teach young people how to make decisions or how to analyze their own skills, values, or preferences, we end up with this default system of career selection.  It is odd that, in most other aspects of our lives, we don’t do that.

In sports we usually let kids choose what they like.  In some schools, we have “electives” where they can choose.  In summers we allow them some freedom to choose their activities.  We encourage them, for the most part, to choose their own friends.  We often allow them lots of freedom about how to dress, food selection, entertainment, etc.  But when it comes to one of the most important choices in their lives, we (society, parents, teachers, counselors, and religious figures) frequently chose for them.  I don’t perceive that we (parents, teachers, counselors, friends) do this with any malice but rather we don’t know how to help them find themselves or we think they might not really be ready to judge for themselves.  What a weird situation, right?  Many young people will spend sixty percent of their adulthood time doing something someone else selected for them, often lost as to what they really want to do.  If you ask most people what colors they like or what food they like or what music or movies they like or what types of people they like they can tell you right away.  But the question so many people come to me with later in life is, “How do I find my passion?”

The comedy is that most people already know what they would like to do, but have determined (thanks to advisors and parents and others) that what they want is unavailable, too difficult, financially irresponsible, or unrealistic.  They have already determined they do not have their dream job, and assume that not knowing their passion is the problem.  With a bit of prodding we find they do know their passion—often in the form of a skill or hobby—but have become accustomed to explaining why they could not do what they have dreamed about based on those nagging voices from often well-meaning authority figures.

When people have the confidence to look at their natural preferences in terms of skills, topics they would like to apply their skills to, and the environments they would like to work in, we can build a picture of the right or fitting career for them comprised of those elements.  With that, we can then build an action plan to work towards a realistic plan to achieve the lifelong career desire they didn’t know they had.  Obviously, all aspects of their dreams may not be fulfilled, but even with a percentage of it they can be much happier than if they stick themselves with a job someone else chose.

Here is a simple, true example of this.  A father called me some years ago and asked me to counsel his son.  His son was in his third year of college and beginning to get poor grades in his business management program.  The father pointed out that he and his son had a deal that once the son finished his BA in Business Management he was to inherit the father’s very lucrative business in financial services.  From the father’s perspective, his son needed help so he wouldn’t miss out on a big chance for future wealth and self-employment.  The son finally agreed to come see me on the condition that our discussions were confidential.  After three sessions, the son finally told me why he was failing his business classes i.e., he did not want to run an insurance brokerage

At first, he could not tell me what he wanted because it would upset his father.  Finally, after much encouragement and assurances that this was confidential, he said he wanted to make movies.  He immediately told me all the reasons he could not do that: only if you were the son of a famous movie maker like Clint Eastwood would you be able to break into the business; no one in the movie business made a consistent living; there were no colleges that really taught you how to do something like direct a movie.  He went on and on.

He had been building a long, complex explanation of why he could not make movies since he was eight years old.  Of course, most of his rationale for this belief came from his father.  Eventually he agreed to find out how many directors were born into famous Hollywood families, how much the average film director made annually, how big a business film making was annually, whether there are any well-accredited college programs that taught you to be a director, and if there were any unions to protect the rights of people in the TV or Film Industries.  It took him month but he came back excited with lots of good research.  We organized the results, took them to his father and proposed that the father allow his son to transfer to a college in LA to study his lifelong dream of becoming a film-maker/director.  Over a decade later, he’s been very successful and made his father very proud. In the end, he did know what he wanted but was being pressured to take a career he didn’t want and might have done poorly in.  Sadly, this is not an isolated incident.

In a future blog post, we will address how you can begin to find your true career passions, but for today, I want you to know that these issues are common and that it is not true that people don’t know what they want to be when they grow up.  In fact, they do know but our society, our educational systems, our over-zealous and over-protective parents, and our professional educational advisers have somehow assumed the responsibility for choosing for you and your confidence in your own preferences has all but been eliminated.

You know your passion best. Who else would?